Electric cars are showing up in neighborhoods across Virginia as more everyday people discover a better way to drive. Electric cars are more fun behind the wheel, less expensive to maintain, and unbelievably efficient compared to (last century's) gas-powered technology. And they're now affordable for millions of Virginia drivers.

What is an EV?

An electric car, also called an electric vehicle (EV) is a vehicle that runs on an electric current. There are three main types of vehicles commonly called "electric," and it's worth knowing the difference:

When we talk about “EVs,” we’re talking about battery-electric vehicles (BEVs) and plug-in hybrids (PHEVs).

EVs contrast with conventional vehicles, which run on an internal combustion engine: you add a fuel (gasoline, diesel fuel, or ethanol), it ignites and releases energy that is translated into motion. In the process, however, the vehicle releases carbon dioxide, one of the greenhouse gases contributing to climate change. In Virginia, 45.6% of total greenhouse gas emissions come from the transportation sector, more than two times more than any other sector.

Why should I get an electric car?

Electric cars enable you to play a part in Virginia's transition to clean energy, as electric transportation is a critical piece of the puzzle that'll get us to a future powered by clean energy.

Want to hear from real people why they chose to go electric? Check out our Testimonials page!

Electric cars undergo the same safety testing and meet the same safety standards required of traditional internal combustion engine (ICE) cars. There are further electric-specific safety standards that must be met: according to the United States Department of Energy, these standards test to limit chemical spillage from batteries, secure batteries during a crash, and isolate the chassis from the high-voltage system to prevent electric shock.  Fun fact: EVs have a lower center of gravity due to battery placement that makes them less likely to roll over.

We can refer you to three sources of information about EV car safety, the National Highway Transportation Safety Administration, the Insurance Institute for Highway Safety, and Consumer Reports.  Sometimes ratings are a year behind for very new models. What we recommend is that you consider a couple of electric models that appeal to you for reasons of cost, electric range, size, and other features. Then look up their safety ratings from the three sources we list above. Generally, you will find that electric cars are safer than their gasoline-powered counterparts.

It is impossible for any machine to be 100% efficient because some energy is always lost to generating heat in the process. Due to physical limitations of cars, some energy will be lost to wind resistance and rolling resistance from tires. But in general, the higher the efficiency, the less energy we need to power our car. In other words, efficiency means achieving the same performance without consuming as much energy.

(This has big implications for moving towards a low-carbon future. For every unit of energy we don't have to use because of improved efficiency, we are reducing our demand for energy and making it more feasible for renewables to dominate our electrical grid. It means we're doing more with less, or creating what environmentalist Amory Lovins would call a "negawatt.")

Gas- and diesel-powered vehicles are not very efficient because they rely on internal combustion engines, which generate a lot of waste heat. There are also a lot more moving parts in thermal engines, like fuel pumps, and they use some of the gasoline's energy but don't contribute to the car's motion. As a result, gas-powered cars can convert only about 17% - 21% of the available energy in gasoline to kinetic energy. You can see a breakdown of where all that lost energy goes here. 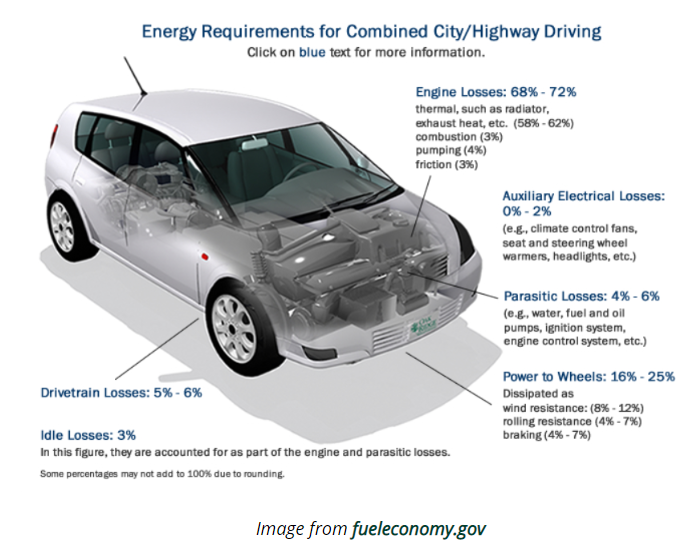 Regenerative braking, which recovers the energy that is otherwise wasted when we use brakes, has been instrumental in improving vehicle efficiency. Hybrid cars have this feature. Regenerative braking can improve the efficiency of a fossil-fuel-powered car up to between 21% and 40%. That means that even the most efficient gas-powered cars can use only about 40% of the available energy stored in gasoline.

This difference in efficiency has two big implications. First, it costs less to run a car on electricity than petroleum. Second, it adds to the environmental benefits of EVs.